It’s that time again, Nichols College. The end of the semester is finally upon us and wow – we had a lot to do by Dec. 15! While we all like to think we have a handle on those semester-long projects, major presentations, and final exams, it’s easy to get stressed out. Fall semester may be over, but for spring semester, make sure you plan your time wisely because finals week falls on students like a load of bricks.

During finals week in December, students who feeling extra stressed and needing some time to themselves had a lot of great, healthy on-campus activities to choose from. On Dec. 13, the Social Program Board hosted massages and pet therapy in Fels Student Center. Also that day, there was a sound-healing meditation in the aerobics room for students to take time to focus on meditation and mindfulness.

If you were unable to attend either of those events during finals week, try to budget time for yourself. Whether it’s going to the gym for an hour or grabbing dinner with your roommates at Lombard, it’s important to manage your stress.

Remember, pain is temporary, but GPA is forever. Just don’t stress yourself out too much. Hope you have a great winter break, Nichols College!

Kate-Lynn Schraffa is a Nichols College senior marketing major. She also interns for the College’s Office of Marketing and Communications. 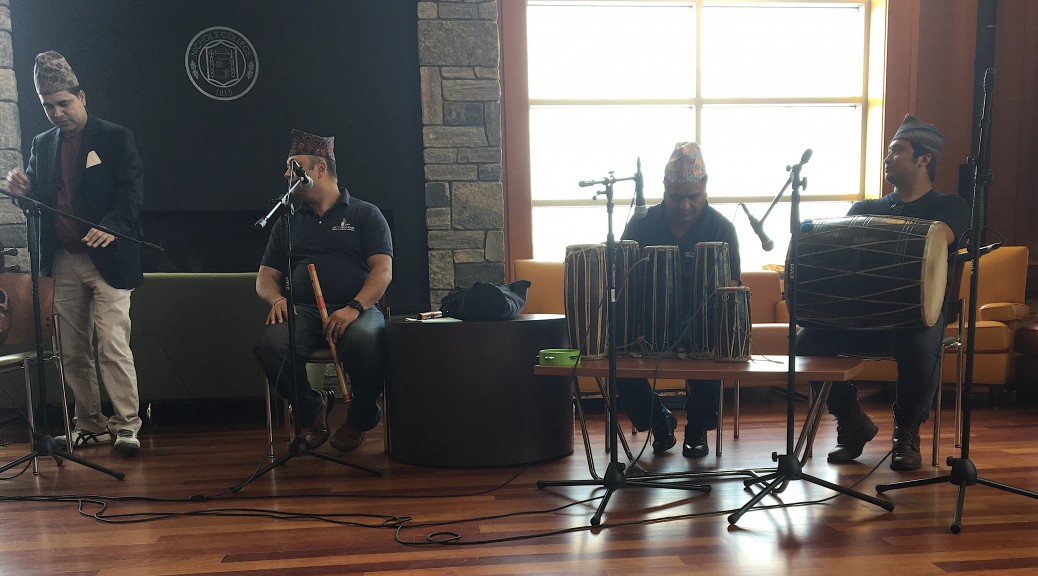 Nichols College students, faculty, and staff got to enjoy beautiful Nepali folk music on their lunch break Wednesday, Oct. 11, in Fels Student Center. The band, Himalayan Fusion Mantra, performed at Nichols thanks to Professor Prajjwal Panday and the Office for International Engagement (OIE).

When attendees walked into Fels Lounge that afternoon, they saw five members of this band with not-your-average instruments. If that didn’t spark their intrigue, then the musicians’ hats would have, for sure. When they began to play their music, the hustle and bustle of WOW-goers at lunch suddenly fell to a dull. The music was so peaceful and relaxing; it was if you were meditating on the high mountains in Nepal. The sounds were similar to the sounds played during a yoga or meditation class.

The band mixes a variety of musical minds, sharing the same interest of music. Shyam Nepali, Ranjan Budhathoki, Nandu Sankhar, Ujjwal Dhaubhadel, and Sushil each offer something unique to the group. Nepali is the engine, mastermind, and founder of the band. He directs the musicians and also shares his knowledge to enhance the sound of the band. Budhathoki is a pioneer Nepali musician who plays the flute, sings, and is founder of another band, Suseli.

Sankhar is the band’s hidden gem. Not only does his warm presence add to the soul of the music, but he also plays an interesting instrument called the Tabala. This generates that Asian taste to the rhythm; his rhythm is the platform where his fellow musicians play around. Dhaubhadel has new talent and an unorthodox style that is the band’s X-factor. He’s in the band because he wants to promote and excel the new music market with traditional techniques.

The fifth band member, Sushil, is a rhythm guitarist. Originally, he loved playing rock ‘n’ roll because of the energy and the young crowd it drew but he said, “I love playing rock fusion music. The taste is different in the fusion rather than rock and the blues. I joined this group to play a different style as well as mainly to preserve Nepali music.”

Unaware of the culture and what the music represents, Professor Panday explained,” We recently had one of our biggest festivals, Dashain, which is like Thanksgiving except it is celebrated for 15 days. We also have another one coming up which is Deepawali, or the Festival of Lights. The music the group played today is typically played during this festive occasion.”

Before the band performed, Nepali said that the music is supposed to give good karma.

Now how did this passionate group of Nepali musicians make its way to Nichols? You can thank Professor Panday for that.

“I met the group when I was attending a Nepalese festival in Boston where they were performing. As soon as I heard them, I was trying to find a way to get them to Nichols so I could share our Nepalese traditional music and culture with the community here,” he said.

Professor Panday loves his culture and wanted to share its beauty with the community he works in. This is one of the amazing things Nichols does for its community; whether you are a student or faculty member, Nichols will help you express yourself and share something that is important to you. It was fun to listen and learn about a culture that you may not have ever even known about.

For more events like this please visit the Fischer Institute at the Office for International Engagement in Fels 314.

Ashley Dallaire is a senior at Nichols College, where she majors in general business with concentrations in marketing, business communications, and management. She also interns for the College’s Office of Marketing and Communications.

This Friday, October 13th from 6-10pm in the Fels Lounge, Campus Rec. will be hosting their first ever Pub Night! Now don’t let the date stop you from coming, because this will be unlike any pub night you’ve ever been to!

Yes, there will be food, drinks, and music like your regular pub night, but Campus Rec. will be holding tournaments in tailgate games like corn hole, Kan jam, as well as new games like Chippo and Bean Bag Bucketz.

The best thing is you do not have to be 21 to participate, as alcoholic drinks will start at 8pm! There will be giveaways, prizes, raffles, and more! Come tailgate with us before your Friday night.