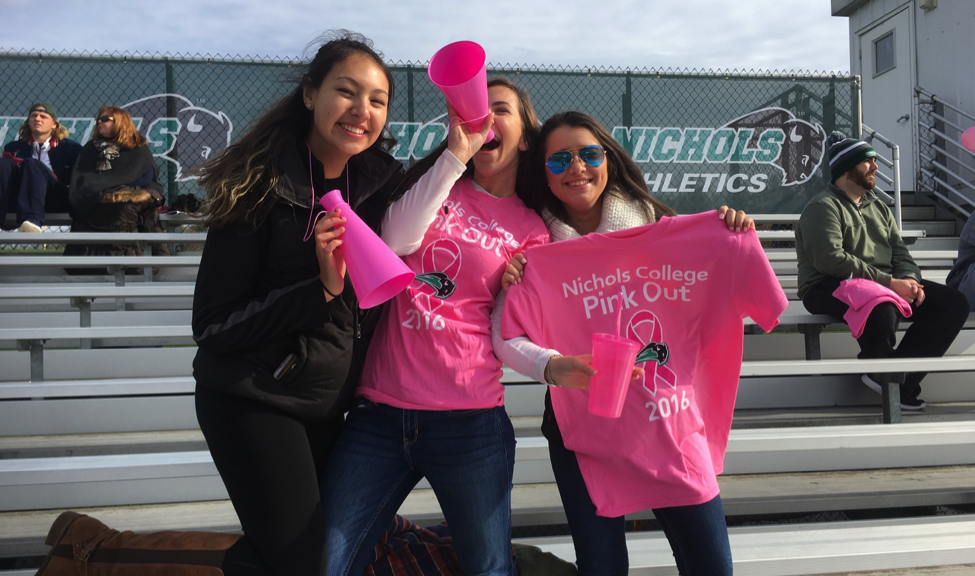 The Nichols Student Government Association (SGA) sponsored a Pink Out event during the home football game on Oct. 29. When walking down to the game, students were greeted by dozens of pastel pink balloons in swaying archways, and tables covered in neon pink sheets.

Members of SGA enthusiastically waved students over to gather their pink goodies: horns, t-shirts, Mardi Gras beads and tumblers. Students were encouraged to take one of everything in support of breast cancer awareness, which the month of October is officially dedicated to.

According to Kristina Maxwell ’18, a vice president on the Executive Advisory Board of SGA, the goal of the program was to “have an event where the student body could come out and show their support for a serious cause. In doing both of those things,” she continued “we elevate the entire campus’ awareness of breast cancer.”

SGA has been known to put on campus-wide events before, such as the semi-annual SGA Day full of games and prizes, but the organization’s main focus is allocating funds for student organizations and negotiating student policies.

The group is also responsible for working as a conduit between the student body population and campus administration. “We exist as the voice of the students” Maxwell commented. “We are here, as students ourselves, to represent the students.”

SGA is also involved heavily in community service, and has recently worked with local schools for various service efforts.

Although the main purpose of the Pink Out event was to raise awareness for the cause, the program did raise close to $150 in donations from students and family members for charity.