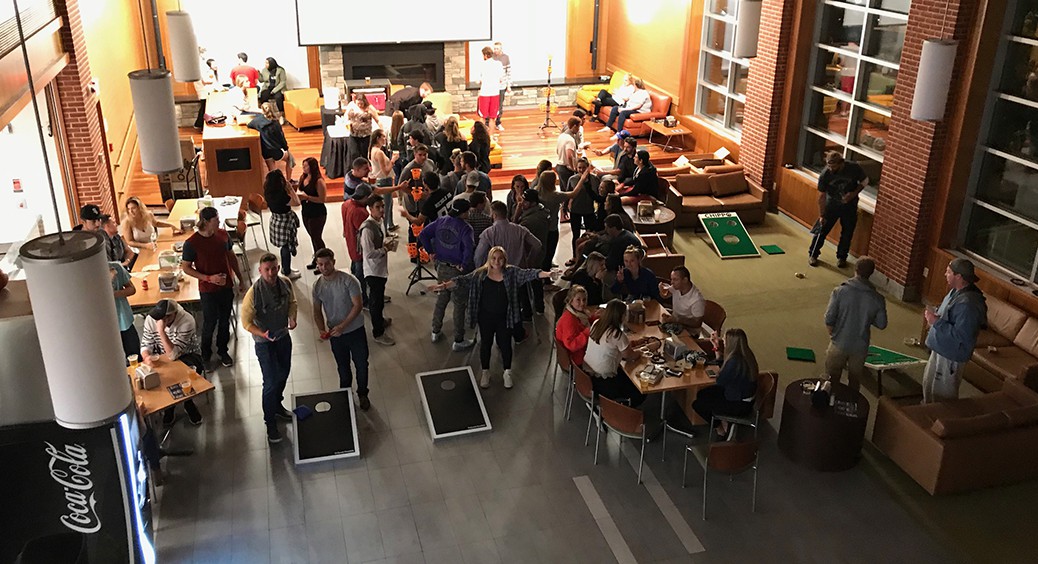 Nichols College Campus Recreation hosted its first ever pub night on Oct. 13 in the Fels Student Center lounge. Everyone tends to think that pub nights are strictly for students and faculty over 21 years of age, but this is not true!

Over 100 people attended this new kind of pub night, including upperclassmen, first-year students and sophomores, and even some faculty members. Everyone had a blast, whether they were enjoying the free food and drinks with friends or playing corn hole against them.

“My favorite parts of the event were the lawn games because they kept people moving around and socially active when normally they would just sit in a circle with their friends,” said senior Alex Quintero. The accounting and marketing major from Dalton, Mass., also said,” I went because my friends wanted to check it out. The experience was great because I got to catch up with some people I haven’t seen in a while.”

Fels Lounge was transformed into an indoor tailgating event. As you walked around listening to music, the food was on your left. The menu included Buffalo chicken dip, fruit kabobs, cheese and crackers, and vegetables with ranch dressing. To your right was check-in, where you got a wrist band or a stamp (wrist band meant you were 21 or older and got three drink stubs and the stamp meant you were underage) as well as a free Campus Rec phone wallet.

In the center of Fels were a couple of corn hole games, the line for the drinks, and a new game called Bean Bag Bucketz. Over by the windows was Chippo, a corn hole-type game where you have to chip three golf balls into holes similar to those of corn hole. 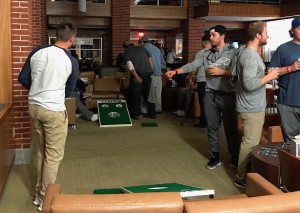 “I had a lot of fun,” she said. “While pub nights are usually fun, having games for all of us to enjoy was an added bonus.”

Free Campus Rec T-shirts were distributed as well as one-of-a-kind cozies from the new Chippo game.

Dean Beebe, a senior business communications major from East Lyme, Conn., said, “I went because it’s a fun event to do on campus. The experience was really smooth and fun for me, and the games also made for some fun, so we weren’t all just sitting around doing nothing.”

This pub night is just one of the fun and engaging events that Campus Rec hosts on campus. Campus Rec’s goal is to provide a fun way to live a healthier lifestyle on campus as well as to give students an alternative to typical college night life.

Follow Campus Rec on Instagram at nc_campusrec to view weekly fitness classes, updates, and future events. If you have any questions or want to be directly involved in what Campus Rec has to offer, email Ashley Dallaire (Ashley.dallaire@nichols.edu) or Caitlin Llewellyn (Caitlin.llewellyn@nichols.edu) for more information.

Ashley Dallaire is a Nichols College senior general business major concentrating in marketing. She also interns for the College’s Office of Marketing and Communications.