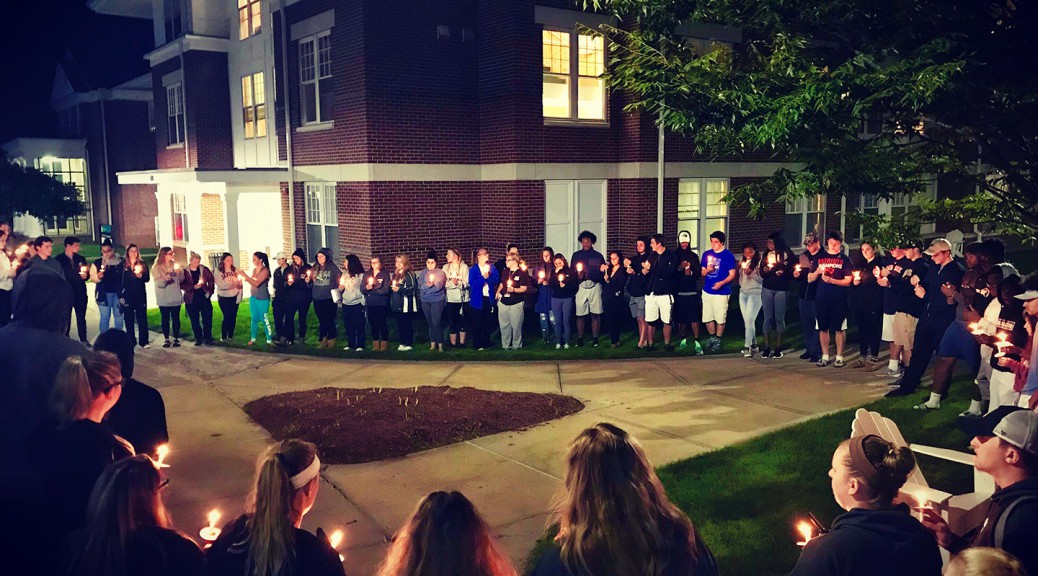 On Oct. 1, 2017, police in Las Vegas responded to multiple shots fired at the Harvest Festival across from the Mandalay Bay hotel. The identified shooter, 64-year-old Stephen Paddock of Mesquite, Nev., killed 58 and injured over 500 people who were watching country music singer Jason Aldean perform.

This was the worst mass shooting in modern U.S. history.

To show our respect to these victims and everyone affected by this terrorizing incident, Nichols College held a Candlelight Vigil Oct. 3, 2017 at 9:30 p.m., on the Copper Beech Quad.

As it was my first candlelight vigil, I wanted to get there a few minutes early to check out the scene.

As I arrived at approximately 9:20 p.m., a handful of students were gathered near the brick wall outside Copper 1, most of whom were members of the Student Government Association (SGA), which ran the event. Initially, I thought that these 13 people (including me) were going to be the only ones to show up. I thought maybe everyone was doing homework all cuddled up in their beds.

Right when 9:30 p.m. hit, however, a swarm of people from all directions started to arrive.

Seeing this crowd of fellow students gave me chills—the good kind of chills.

From first-year students to seniors, there were about 100 people on hand to pay their respects to the victims of the Las Vegas shooting. The air was filled with hope as more and more people were getting their candles prepared for the vigil. Once, everyone was ready, we formed a circle where we passed the lights from our candle to the person next to us; there was absolute silence.

As all the candles were lit, SGA President Catherine Hoey, a senior, announced that if anyone wanted to say anything about how they feel about the incident to say it now. Immediately after she said this, though, the sprinklers went off and got a good part of our circle wet. This lightened the mood before we started to seriously talk about what happened. I thought that was great because as I looked around the circle, I could see the concern and somewhat nervous looks on the students’ faces.

We reformed our circle and Kristina Maxwell, a senior human resources management major, was the first to speak. She was followed by Ariff McLaren, a sophomore from Brockton, Mass. McLaren said, “It is important to come together as a unit, to fight off the hate.”

After a long pause, Rebecca Khachikian, a sophomore from Dennis, Mass., spoke out, “I personally knew five people who were at that concert, since I grew up in Vegas. So it was really scary for me because what if I lost them? They are all fine, but I could have lost the people I cared about, and it could happen here just like the Boston Marathon bombing. Some of you might have known people who were affected.”

Khachikian’s story made the vigil more real in the sense that someone in our Nichols College community was affected by this incident. You just never know what people go through, which is why vigils like this are crucial in showing our love and support.

After a moment of silence, Hoey thanked everyone for coming out, and everyone dispersed back to what they stopped doing to attend the vigil.

Megan Nathanson, a sophomore sports management major, shared her thoughts about the vigil with me.

“Everyone was on the same page in that we all need to unite together, appreciate those who are in our lives, and never take a day for granted,” she said. “I attended because I wanted to show my support for those who lost their lives and those who survived. Lives are now changed forever because of this terrible incident.

“I’m really glad I took the time to go to the vigil,” Nathanson added. “It was a small act, but it helped to stay positive and process what happened.” 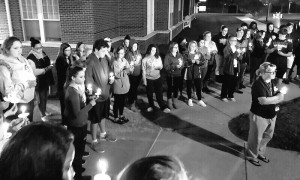 Ashley Dallaire is a senior marketing major at Nichols College and an intern in the College’s Office of Marketing and Communications.