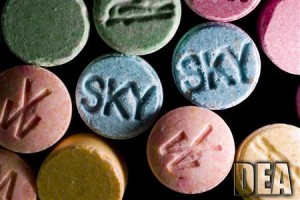 The name Molly is seen as unpopular, outdated…some even say it’s ugly. A quick review of internet blogs concerning the popularity of the name Molly shows mixed emotions. Some love the name and some hate it. Some seem to think it means “girl with glasses and braids” when it actually has a rather beautiful meaning behind it. Molly means “star of the sea” or “wished-for-child” but none of these facts makes the name any more favorably viewed. Once a popular girl’s name, now the name Molly ranks 59th for babies named in 2013. We can reasonably conclude that this is an un-popular name.

But don’t worry, Molly. Your name is extremely popular in drug form. Usage of Molly, commonly thought to be the purest form of ecstasy one can get, has skyrocketed over the past decade, considering the emergency room visits that have doubled since 2004 from usage of this drug. This is scary, and it’s right in our own backyards.

Ecstasy is a popular club drug that induces euphoric feeling and mild hallucinations. Made up of Methylenedioxymethamphetamine, (did you catch the methamphetamine in that?!) Molly is what drug dealers would like you to think is the “safe form” of ecstasy. It’s not. Molly is more commonly than not a combination of synthetic stimulants and any number of chemicals mixed in a little pill stamped with a winsome picture that people just keep taking. Methamphetamines are made from pure chemicals… so is Molly. Do not be fooled that this drug is in any way safe to take.

After a public safety notice was sent out on October 5th, an attempt was made to get Nichols students to speak out about this drug. Only one came forward, under strict condition she remained unnamed. “When I went to the clubs, we would take ecstasy. It made me grit my teeth and yeah I felt all happy and warm and just wanted to dance and snuggle and hug everyone. But when you come down from the drug your jaw hurts because you’ve been gritting your teeth for hours and you don’t even realize it. And then you are like depressed for days. So yeah it’s fun for a bit but then it just sucks. It’s not worth the way you feel like sh—after. Seriously. I took Molly once and it wasn’t any different. I got higher I guess because I couldn’t see straight but the comedown was all the same. I just laid in my bed for like two days and ate a bunch of food and cried about everything.”

While hoping for more students to come forward, what we can see above gets the point across – it’s not worth it. After four reported deaths this summer (deaths this summer in Eastern cities, as reported by npr.org and abcnews.com) and pop culture artists attempting to make this drug look cool, it is important to educate yourselves and learn what drugs can do. Sure it seems fun, and given a club environment, you might not know you’re overheating and overdosing before it’s too late. When speaking with friends and colleagues about this article, the statement was made, “Whatever happened to just having a few beers and smoking a joint?” While in no way does Nichols College or this reporter condone the use of illegal drugs or promote drinking underage, you do have to wonder – what’s up with all the drugs? Are we so bored? Have we become such a boring culture that we need stimulants to have a good time? Can we not just have a glass of wine and intelligent conversation? When did Molly come to play, and why? Who decided this was a good idea?

It’s not. Don’t do drugs. It’s too much of a chance in what are the most important days of our lives. College is fun enough. Don’t mix it up with chemicals.