October, as everyone knows, is breast cancer awareness month. On October 28th Nichols had a “Pink Out.” The Center for Student Involvement sold awesome pink t-shirts for $5.00 that said, “Get your pink on.” Everyone who wished to participate gathered in front of Academy Hall. We took a group picture in the shape of the pink breast cancer ribbon. 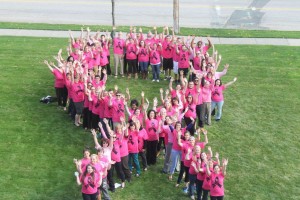 It was amazing to see all the people who came out to be in the picture and support the cause. When I was talking to my friends, they said there were more people this year than last year. The amount of people that showed up is what really made the event and the ribbon a little more remarkable than last year. The picture came out great as most of us had the same color pink on, which really made the ribbon look amazing. Hopefully next year we can get an even bigger turn out and make a larger ribbon.

Seeing this was breathtaking because most people have been affected by breast cancer in some way. Someone that is very close to me had breast cancer. Luckily it was found early, and she did everything in her power to stop the cancer. I believe it was this summer that she was clear and the doctors told her she was cancer free. It was such a relief to learn this. Some people may not have stories that end like that, but to see the support from everyone was inspiring. Almost everyone in the world is affected by some type of cancer or disease, whether you personally or a close loved one or friend. It is something to take seriously, but most often brings people together, just like at Nichols. Cancer has greatly affected my family, and I have sadly lost many to it. I took part in the Pink Out event to help the cause so one day loved ones will not lose the battle.