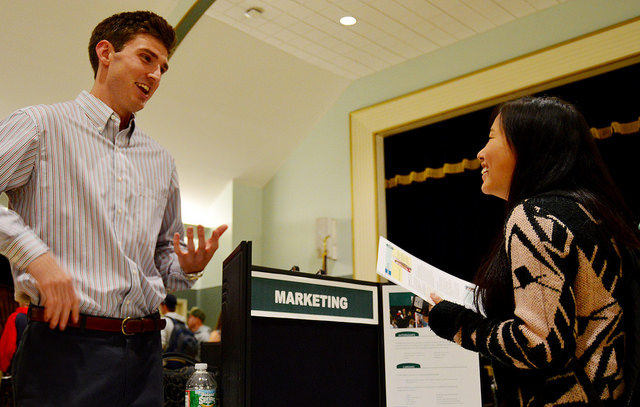 On October 13th, Daniels Auditorium hosted this fall’s 13th annual Academic Majors Fair. As a Professional Development Seminar requirement, freshmen students were required to check out the fair and look into their majors of interest. 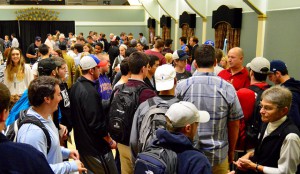 Many students wandered about the fair stopping at each booth. It was clear which students were undecided and those who had an idea of what they wanted to do. For example, the sport management table was the most crowded of all 16 tables; Tim Liptrap stood in the center of the flock of freshmen, discussing different avenues of sport management and career possibilities.

Kate was also perusing the psychology table, but resolved sport management might be the way to go based on her interests. “The fair is great because I’ve found a lot of good resources and networking connections.”

A few students found their way to the Finance major. Riley Bishop of Charlton, Mass., and Aiden Stuart of Orange, Conn., both became interested in finance through a high school course. Aidan seemed set on finance but was still keeping his options open toward the human resource and accounting majors.

Criminal Justice was another popular booth. First-year student Joe Small of Goffstown, N.H., was certain about his choice to major in criminal justice. He was influenced by family friends who are state troopers and police officers. Joe explained that criminal justice is a strong field to get into.

KC Poplawski, Director of Advising Services, has been involved with the fair since it began. “More students started considering a second major or minor as a result of this event. We noticed a rise in students with a secondary area declared.”

The fair was bustling with activity, and every professor was busy speaking with multiple students at once.  Not only was the fair a great event for freshmen, but for every student. Upperclassmen were stationed at tables to discuss their personal experience in their chosen major. This aspect to the event gave freshmen a realistic idea of what it would be like to pursue a specific area of study. Some second-year students were looking as well; students do not have to declare a major until the end of their sophomore year. 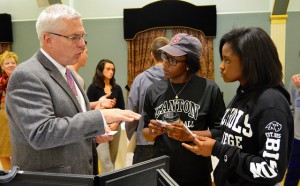 Along with the numerous tables advertising majors, Career Services and the Honors Program both had their own booths displaying benefits and resources.