The Athletic Center’s main gym was filled with students, faculty, and staff on Oct. 5 as the Student Athlete Advisory Committee (SAAC) set up for the annual Bison Rally. The Bison Rally is a school wide event where the athletic teams participate in a lip sync battle against each other. This year, there were 5 teams competing to win the lip sync trophy.

The bleachers in the main gym were packed with students as well as the indoor track overlooking the basketball court where the lip sync was taking place. Each athletic team was given the opportunity to get a group of their team together and come up with a fun, engaging lip sync performance for not just the students but for three chosen faculty judging the competition. The judges are to give each team a score between 1-10 and who ever accumulates the highest amount of points wins the trophy and are named “Lip Sync Champions;” that is until next year, when the battle takes place again. This, in my opinion, has become a huge competition between the sports teams but a fun, supportive kind of competition. Although the sports teams are battling against each other, they are always cheering each other on and supporting each other during the friendly competition.

To start the night, men’s lacrosse came out with a bang and blew the crowds away by switching from slow to fast paced songs; you could definitely tell they had been practicing for weeks. Next up was the women’s field hockey team followed by the men’s and women’s basketball teams, and then finally the women’s ice hockey team. What I think makes this event so unique is that each sports team comes up with their own dances. There’s never repeated songs or dance moves between the teams. 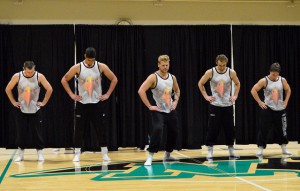 Men’s basketball took the cake when they didn’t receive a score under 9.0 from either of the judges, but their sister team—women’s basketball—was not far behind, coming in second place. Women’s ice hockey, meanwhile, followed in third.

Michelle Keklik, a senior sport management major, noted: “This is by far my favorite campus-wide event; I’m never ever disappointed in the new, creative dances the sports teams come up with each year.”

Chelsey Mahoney, a senior women’s basketball player and hospitality major, expressed: “I’ve been part of the lip sync competition with my team since my freshman year. It is not only fun to perform in front of our student body, but all the practice and hard work that went into the dance and music made us closer as a team.” 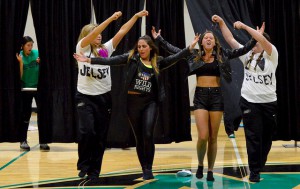 In my opinion, this event will always be enjoyed by the students; there’s nothing better than getting together with your fellow Bison and having a great time! 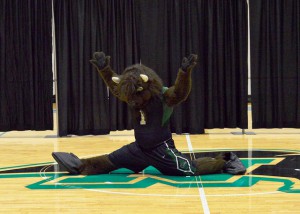