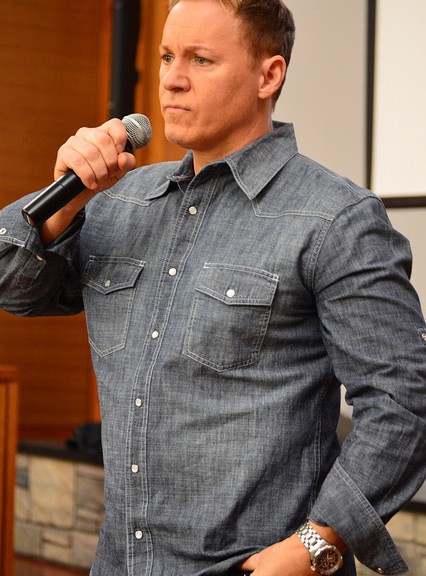 In the spirit of Halloween, Nichols College students were treated to a few tricks (or WERE they?) by ghost hunter and medium Chris Fleming. Nichols’ Campus Activities Board brought Chris to campus on Oct. 16. This was his second year on the Hill. During last year’s on-campus ghost hunt, students joined him at Academy Hall to see if they could spot any spirits; this year, they checked out the Guest House.

First off, here is some background on Chris. He started to see ghosts at the young age of five; he described them as little creatures that would come out of his walls. He would try to tell his parents about what he saw, but they told him he was just having nightmares and to simply ignore them. Once these creatures began transforming into larger ones—and actual human manifestations—Chris could no longer bare it. His parents started to believe him when he grew older; his mother was actually interested in ghosts and paranormal things. One day his mom decided to buy a Ouija board to determine what sort of paranormal activity her son was witnessing. This turned out to be a mistake, however, as Chris almost became possessed.

You’re probably wondering how someone can almost become possessed. Well, when he and his mother were using the Ouija board he started to levitate off his chair. His mother panicked and started to yell prayers at him until he returned to a normal state.

Our ghost-hunting adventure on Oct. 16 involved the Nichols College Guest House, which is known to be haunted. Before we even walked into the circa-1700s brick house, Chris said he could sense the ghost of a woman standing at the second-floor window. When he used the ETP (a device used to communicate with ghosts) we could hear her saying “Oh no, they are coming in.”

The house has two levels. On the first floor, right when you walk in,there is a small hallway and then a living room. The room over is the dining room. Then next to that room is a little sitting area and the kitchen. The house has two staircases; upstairs there is a master bedroom and another bigger bedroom. Between the two rooms there is a bathroom. Down the hall, there are two more rooms.

When we proceeded into the house and sat in the living room Chris asked how many ghosts there were in the room with us and we all heard seven through the ETP. At first they were angry that we were there, but once he explained that we weren’t bad people and why we were there, they were much nicer. The ghosts actually started to joke around. We were able to hear all of the ghosts through the spirit box (another device used to communicate with ghosts).

There was a horse figurine on one of the coffee tables, and some of the students asked the ghosts to move it. In return, the ghosts told Chris to stand. When he stood, the horse moved. We were shocked by what we had just witnessed.

As the event neared its end, Chris allowed us to ask questions and see if any of our loved ones were present in the house. One of the student’s brothers came through the spirit box; he died five years ago in a car crash. It was so sad and moving that more than half the room started to cry. The student asked him a few questions and one was about their new niece that their sister just had. She asked him to be sure to look over her.

Last year, I wrote in the Bison Chronicles that I would never again partake in ghost hunting, but I am glad I changed my mind. I did not find that this year was as scary as last year, but it was still amazing to witness what had happened in the Guest House. Only fifteen people are allowed to go on the ghost hunt. This is my second year participating in the hunt and I have two more to go; fingers crossed I am picked again!

Catherine Hoey is a Nichols College sophomore undeclared and works for Nichols’ Office of Marketing and Communications.