Nichols College competed Nov. 13 against three other New England-based colleges in the 2015 Sport Management Case Invitational. Teams from Nichols College, Anna Maria College, Eastern Connecticut State University, and Mount Ida College each had to prepare a 10-minute presentation comparing either two athletes or sports teams, and proving one as the superior. The event was held in Daniels Auditorium on the Nichols campus.

Anna Maria’s four-member team was the first to present. Members included four junior sport management majors: Kevin Grey, Alex Geiger, Edward Jankowski, and Gregory McGoldrick. They argued that the Green Bay Packers have a more dominant dynasty than the New England Patriots. Two main speakers commanded the stage, one representing the Packers, and the other playing devil’s advocate for the Patriots. The group supported its arguments with Super Bowl results, point averages, and charts showing rankings of the dynasties.

The judges critiqued that while Anna Maria’s team looked great with its uniformed suits and seemed well rehearsed, the presentation moved too fast and needed to involve their audience more.

According to the team, they chose to present on the Green Bay Packers and the Patriots because the teams are easy to compare and contrast, and it’s one of the most commonly debated topics. The team also added that it was the first time Anna Maria competed in the event and felt relieved to have gone first.

Nichols College was the second team to present its comparison of the 1973 Oakland Athletics and the 1998 New York Yankees. The student speakers included seniors Justin Doyle and Austin-Robert Weber and juniors Ethan Godfrey and Anthony Rodi. They are sport management majors and have experienced the invitational before.

The Nichols students shook the judges’ hands and gave each handouts to follow along with the slideshow. They compared the Oakland Athletics and New York Yankees with various charts displaying five-year comparisons, home-run totals, and offensive efficiency. The presentation style was similar to Anna Maria’s, using the point-counterpoint technique. In the end, the Yankees were dubbed the more dominant team.

The judges commended the Nichols students on shaking their hands and taking the time to explain baseball acronyms, which not everyone knows. Although the team was well rehearsed and met the time allotment, the judges thought they spoke too quickly and needed to spend more time explaining what is important about the charts and statistics.

“We’re happy about how we came across with only two weeks of preparation,” said Weber. “We chose baseball because of all the statistics available, and the two teams are similar within the time period.”

The judges enjoyed the team’s direct approach and were proud of the team’s quick recovery when one of their presenters lost his place. The presentation was professional and engaging, but the judges recommended digging deeper for details next time.

The students from Eastern Connecticut said it took them a while to find the right argument, but they learned a lot from the critique and were grateful for an opportunity to meet with the judges.

Mount Ida College was the last team to present. Three senior sport management majors commanded the stage: Shawn Bernardo, Nicole Pettit, and Henry Vilaivanh. Their argument aimed to prove that Jim Brown who played for the Cleveland Browns is a better running back than Emmitt Smith, former player for the Dallas Cowboys and Arizona Cardinals. The students explained their topic and what they were going to cover in the slideshow, before the statistics started. They compared the two players by yards per attempt, average yards per attempt, and touchdowns per game. The team ended with a video emphasizing their point that Brown is the superior player.

The team was praised for its smart use of visuals and media. The judges said they felt more emotionally connected to the presentation, and it was obvious that the data presented was carefully selected. The group handled the project surprisingly well, considering it lost two team members to sports games and one to illness. The judges critiqued that the only thing the presenters lacked was confidence.

“We were panicking a bit before about our lost team members, but we felt good during the presentation,” said Pettit. “This is a great experience to see other people’s points of view.”

Cacciatore explained what he looked for in the student sports presentations. “Professionalism, teamwork, and presentation style are important,” he said. “This is exposure to skills that can be carried over into job interviews.”

“[We look for] clear presentation of statistics and rationale behind what is important and why,” Richards added. 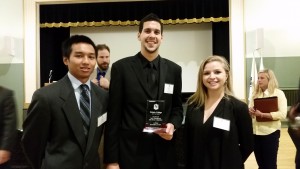