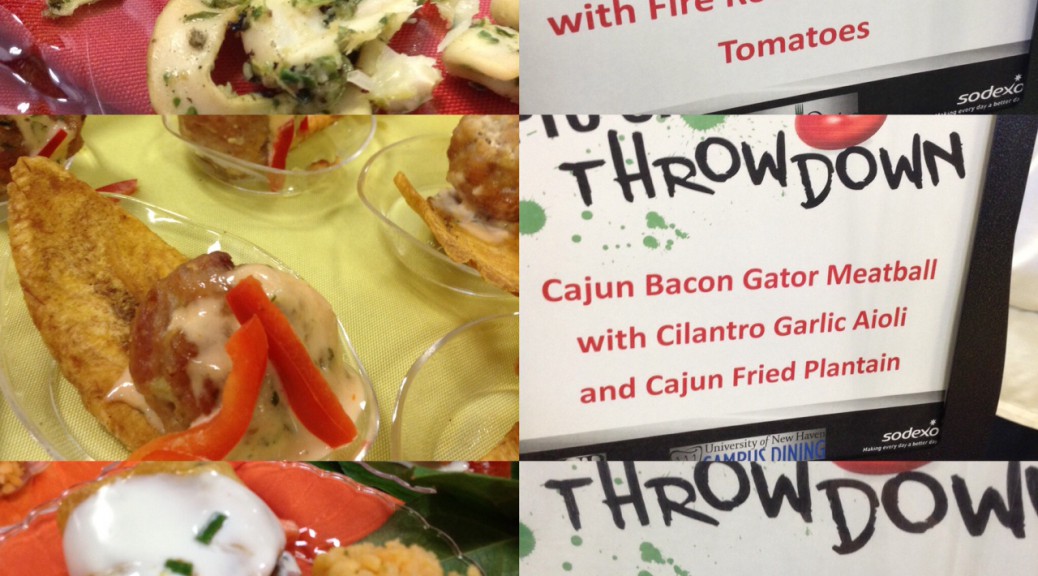 On April 6th, Nichols College hosted the 4th annual Battle of the Chefs competition in Lombard dining hall. This pro chef throw down was sponsored by Sodexo. Nichols College, Assumption College, Framingham State University (FSU), University of Bridgeport, and University of New Haven (UNH) each had at least one chef representing their campus.

Three teams were formed for the competition and a required protein was chosen for each team. Chef Bob Andersen of Nichols College was partnered with a chef from FSU. Together they created a grilled marinated squid with fire roasted heirloom tomatoes. University of Bridgeport worked with UNH to cook up Cajun bacon gator meatballs with cilantro garlic aioli and Cajun fried plantains. Nichols executive chef Michael Heenan was partnered with Assumption College and produced ostrich chimichangas with pico Spanish rice and queso blanco.

Nichols students were a little skeptical about the strange entrees, but with the help of emcees PJ Boggio, Janet Newman, and Nora Cavic, most students were convinced to try the exotic food. The announcers kept the dining hall involved in the lunchtime competition by cracking jokes and telling fun facts about food.

“What is a chefs favorite HBO show?” asked PJ. “Game of Scones!”

After students and faculty tried all of the dishes, their votes were submitted and counted at the end of lunch. Early on in the competition it was clear that the dining hall favorites were the ostrich chimichangas and gator meatballs.

All three dishes were tasty, but there was a clear winner. The squid was seasoned perfectly, but I didn’t much care for the green tomato. The gator meatball was decent, but the aioli and plantains were really the best part of that dish. I liked everything about the ostrich chimichanga; although the meat was a tad gamey it worked well in the burrito and the rice and queso added great complementary flavors.

After the votes had been counted, Nichols College’s Michael Heenan and his partner Mitchell Pino of Assumption College were deemed the winners of the cook-off for their delicious ostrich chimichangas with pico Spanish rice and queso blanco.

Resident Dining Manager, Laura Luna, explained that this year the teams are comprised of professional chefs from surrounding colleges. In the past, the competition has featured solely student teams or teams that match up professionals with students. The participants and pairings vary from year to year.

The winners of this year’s competition were awarded a trophy and bragging rights.