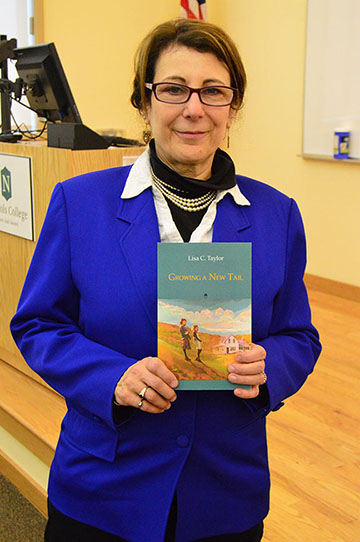 Fischer Institute sponsored a lecture on entering the world of a story presented by adjunct English professor Lisa Taylor on Oct. 28. Lisa explained how a good piece of fiction comes together through examples of her own work. Her newest publication is a collection of short stories, “Growing a New Tail”, and her most recent compilation of poems, “Necessary Silence” both published by Arlen House/Syracuse University Press. Lisa elaborated on her various characters that usually fall under categories of liars, criminals, and lovers. Many of her stories focus on characters that are in need of reinventing themselves or have been taken down through hardships.

“Nobody wants to read about a great life, they want conflict and trouble,” Lisa elaborated.

Lisa says that she is drawn to misbehaved characters and often conjures up a story simply from being in a public space and people watching. There is a story to be found even in the most mundane of places, such as the grocery store or the DMV.

Lisa read a few excerpts from “Growing a New Tail”, and also shared her newest story “Second Lives” which is not yet finished. Lisa’s stories capture your attention from the very first line and her characters feel real, each with their own distinct personality and mannerisms. She presented characters with OCD tendencies, mourning the loss of a child, and living a “second life” in Vegas.

“It’s important to have a second life when your first one isn’t going to well,” Lisa mentioned.

Students in the audience asked questions about how to keep stories diverse and how to overcome creative hardships such as writers block. Lisa eluded that she keeps her stories different by varying character age, gender, economic standing, and ethnicity. In order to overcome a creative block, a writer must keep writing every day, even if it doesn’t seem any good. Lisa compared writing skills to muscles; if you stop using them for a period of time they won’t be as strong as if you had been regularly using them.

Lisa offered great advice to struggling writers such as myself, and her stories were perfect examples of well-written fiction. About 65 students attended the lecture and earned a cultural credit for doing so.

Lisa’s stories have earned her recognition in the literary world; she won the Hugo House New Works Award for her story “Mosaic” and has been interviewed by San Diego Book Review, Association of Writers and Writing Programs and many more. Apart from teaching creative writing at Nichols College and Eastern Connecticut State University, Lisa occasionally travels to Ireland for lectures and workshops.