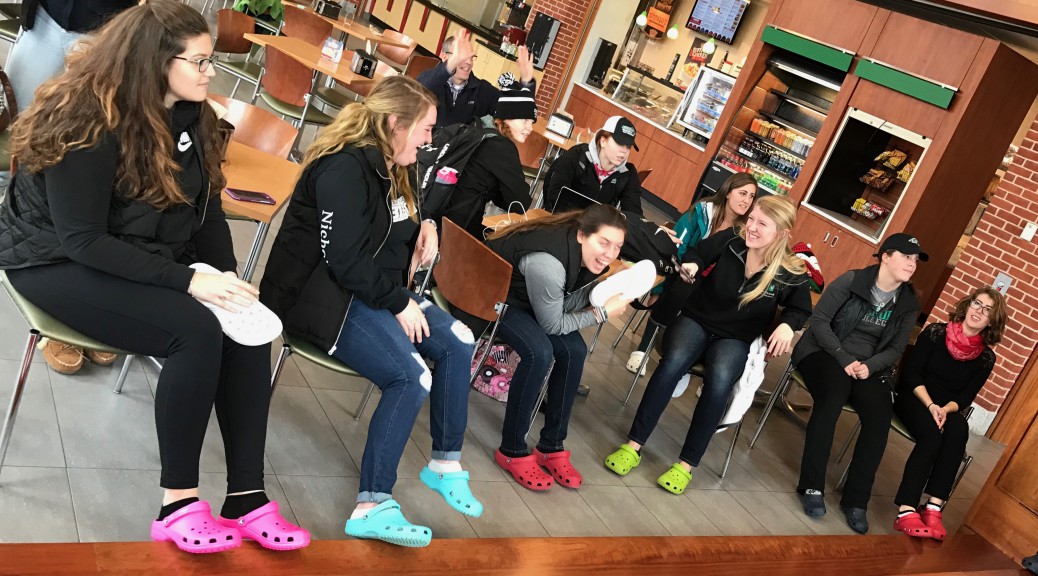 DUDLEY, Mass.—Dec. 16, 2016—Nichols College students took to social media during the week of Dec. 5, 2016, to support their peers and a charitable movement: the #CrocsCampusChallenge.

An honors Principles of Marketing course taught by Professor Jean Beaupré joined a collaborative effort with Crocs Inc., in which the company offered to donate 200 pairs of their popular shoes to children in Haiti in exchange for a social media campaign run by Nichols students.

It started as a joke among the classmates: When the first class session of the semester was held in September, Professor Beaupré asked the students what their interests were. When it came to sophomore Brooke Downey’s turn, she enthusiastically replied, “I really like Crocs.”

In October, the class decided to send a humorous video to the Crocs marketing team, portraying Downey as having an obsessive need for Crocs—a need that resulted in her owning 103 pairs of the shoes. Several other students participated in the filming as Downey’s concerned friends staged an mock intervention for her “addiction.”

To the surprise of Professor Beaupré and her students, the Crocs marketing team enthusiastically responded to their submission and shared the company’s marketing strategy for the upcoming spring season. Crocs also proposed to partner with the Nichols students in an effort to spread awareness about the company and their products on campus. In exchange, Crocs would donate their shoes to children in Haiti.

The class had a short timeline to organize the widespread movement, with final plans for the week-long event drawing to a close in mid-November. The class reached out to college officials to help participate as influencers for the project, including Dean of Students PJ Boggio.

“This has been an incredible way to teach the students to capitalize on their opportunities,” said Professor Beaupré. She reported that Nichols College is the first college campus to participate in this collaboration with Crocs. 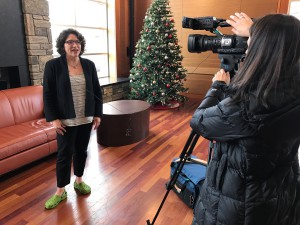 “The students have been part of a real-life project that is not only making a difference, but it’s also giving them hands-on social media marketing experience,” she added. “Experiential education at Nichols College is a great way for students to learn marketing concepts and put them into play.”

Students from the class divided into teams to focus on the project’s specific aspects, including managing and monitoring social media posts and engagement as well as organizing events. Throughout the week of Dec. 5, all Nichols students were encouraged to attend events such as “Crocs and Cookies,” “Chuck a Croc,” and a campus-wide scavenger hunt for “Crocs Cards.”

The involved students spearheaded the initiative with a strong social media presence, using the trending hashtags #CrocsCampusChallenge and #CrocsForHaiti on Twitter and Instagram to prompt interest from other Nichols students.

Working on the social media team to stay on top of the activity, sophomore Greg Giglio described how they faced the challenge of maintaining the success of the campaign along with their other personal duties, such as attending class.

“We had to learn how to balance this project with everything else we had going on as individuals,” he said. “Keeping active with the Twitter account was important, so it was up to us to learn how to incorporate these responsibilities into our daily lives.”

The Twitter account, under the handle “NicholsCrocs” produced 553 posts and retweets in less than a week of operations, and nearly 300 uses of the #CrocsCampusChallenge hashtag.

Sophomore Janina Messerlian donated her time to working the “Cookies and Crocs” event on Thursday, Dec. 8. She described the opportunity as “an integral part of my experiential education” and said: “Crocs and Professor Beaupré really let us take the reins on this project, and let us figure out how to make this go viral and get people involved. It was all about what we, the students, could do with the resources we were given.”

The appreciation for the opportunity is felt by members of the class. Lauren Bennett, a women’s ice hockey player in the class, expressed her thanks for everyone involved in the project.

The donated Crocs will be sent to Jérémie, Haiti, through the Haitian Health Foundation, based in Norwich, Conn.

“I really want to thank all of the people who helped us,” said Giglio. “Professor Beaupré, the team at Crocs, the students in the class, and all other faculty, staff, and students who helped us accomplish this incredible achievement: Thank you.”

Megan Fields ’17 is a Nichols senior marketing major and psychology minor and interns for the College’s Office of Marketing and Communications.