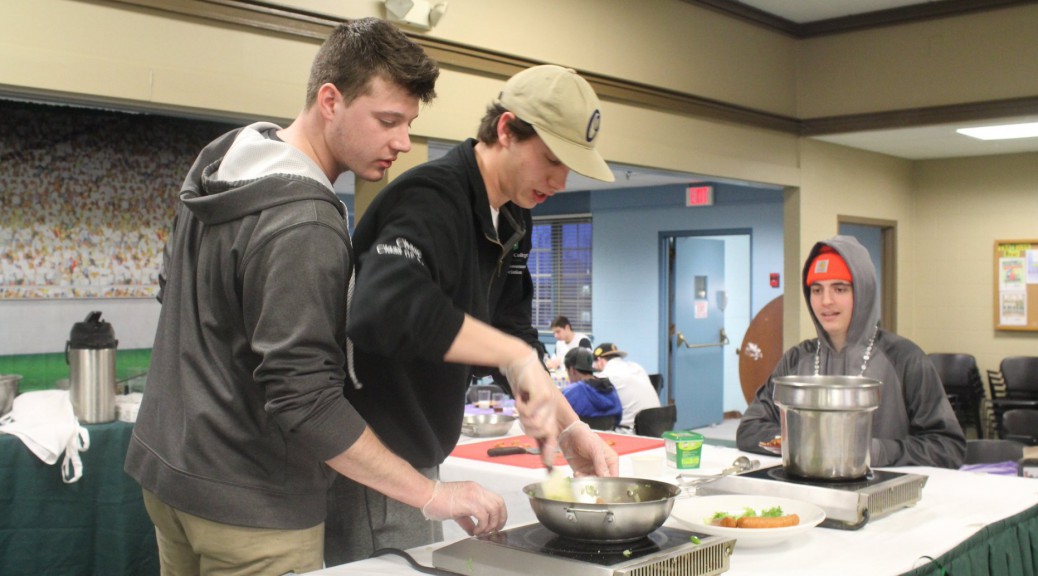 Every year the Nichols Hospitality Club hosts ‘Battle of the Chefs’ in Lombard dining hall. This year’s event consisted of three nights and four teams battling against each other. There are two semi-final rounds and then a final round in which the winner will receive a trophy and their meal served at Chef Bob’s station! The rules are that every team must use the “secret ingredient” of the night and prepare a meal that will be shown and tasted by the judges. Each team gets an hour to do this and for every minute more one point will be deducted from their score.

Tuesday, February 24, was the first night of the cook-off. The night’s secret ingredient was a spicy sausage. The two different dishes made looked delicious! Team one was Ryan and Nick and team two was Chase and Jon. The first team made a spicy sausage and rice jambalaya and the second team made a tossed vinaigrette salad and served the sausage with rice as their main dish. The winner of round one was Chase and Jon. They were then to compete against the winner of round two, which took place on Wednesday night.

Wednesday night, February 25, I along with my friend Katie were the chefs for the night! Our competition were Laura and Jack. I have to say that it is more stressful than it looks! On top of only getting an hour to cook, Katie and I were nervous that our fish was not cooked all the way through and kept putting it back onto the stove—but we managed to finish on time. We made bruschetta with honey fish and asparagus, while the other team made a pineapple, lemon fish with potatoes. Katie and I ended up losing by half of a point (which we are still pretty upset about)! However, the other team also did a great job and created a delicious dish. 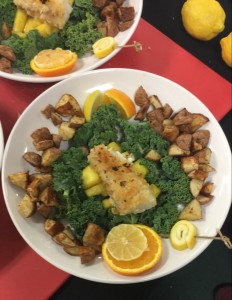 On Thursday, February 26, Laura and Jack competed in the championship round against Chase and Jon. For this round, the two teams had 75 minutes to make a meal. Again, the scoring came to only by half of a point difference with Chase and Jon prevailing! Chase and Jon received a trophy and their winning meal will be featured at Chef Bob’s station in Lombard. Keep an eye out for their delicious beef meal at Chefs Bob’s station! And don’t forget there is always next year for you to be the winning chef.